Sunshine and smiles at our 2013 summer picnic 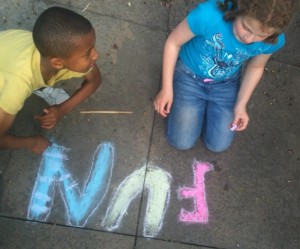 In stunning sunshine, Sunday  morning saw a small army (well, at least a  fair sized platoon) of helpers in the Pleasaunce organising the FEGP / Parksfest 2013 summer picnic, erecting gazebos, moving tables  and setting up  power supplies  for the all important tea urn  and the bands (thank you to both Chevening households that hosted the cables).

Professional riggers arrived and put up staging and the two large marquees.  Prizes for the tombola were mysteriously obtained and shed-loads of cakes for the cake stall were deposited (thank you Christine).  In the midst of the general melee the professional musicians and technicians for the four bands arrived. Everyone appeared to know what they were doing  and soon  the Pleasaunce resounded to that well known refrain of “Testing – testing – one – two – three”.

At 1200 hours people started to accumulate and continued to do so throughout the afternoon, despite stiff competition from televised sports and two minor musical events elsewhere in London and Somerset! The Bridge opened its doors for face painting and family story telling was led by Giles Abbott; hogs were roasted and chicken made jerky; African drums drummed, Arts workshops did arty things and the bar did a roaring trade as the afternoon got  hotter.

Great music was provided by, two local(ish) bands, The Lost Chords and Ffog, Rachel and  Niall supplied laid-back jazz and the afternoon rounded off by Ronnie Scott’s Rejects. All with barely a technical hitch and little fuss as the bands shared equipment to make life easy for all concerned.

And at the end the miracle happened… lots of people helped to put everything away and no hernias or back strains have been reported! They say “many hands make light work” and that was really true this year. Many, many, thanks to all the volunteers and Friends Committee members, it really made a difference.

A great day organised in a harmonious manner by local people that welcomed everyone .

For me the event was summed up perfectly by Gavin  McGregor: “What a great day. Everyone should be really proud – it seemed to go like a dream, and the atmosphere was terrific, smiles everywhere you looked and a great variety of activities and entertainments to choose from. It made me doubly proud to live here.

“We were also really pleased to see people signing up for more information about Pip! – our orchard, food and wildlife group – so we hope to see more willing hands joining our band of volunteers.” 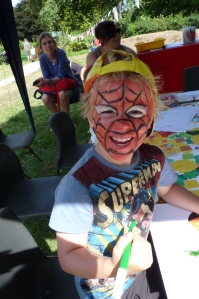 Can’t decide whether to be Superman or Spiderman? No problem for this partygoer

Sue Gay paid tribute to all of the unsung helpers who materialised on the day, saying: “The event wouldn’t have been possible without the help of ALL the Friends of the Park.

“People I’ve never met just turned up and said ‘What can I do?’ Maybe the sunshine made all the difference, but it wouldn’t have worked so well without people. We also had a record number of cakes just handed in. So many we even sent a trayful to Lizzie in the cafe at the end.

“And while we were all enjoying the music and the refreshment in the dog free zone, there were almost as many up at the Bridge and Café with the Naval College and storyteller.

“Glastonbury, the British Grand Prix or Andy Murray playing at Wimbledon didn’t seem to stop people coming to the Summer Picnic at the Pleasaunce.”